Paul Krawiec and Mark Davis (Anthropology majors at U.C. Berkeley) spent most of the summer of 1997 in Haiti
and the Dominican Republic, conducting interviews, doing research and filming the journeys of Francois Macandal.
Many of the images from interviews and locations visited, appear in the documentary The Black Messiah.
Below are some additional images of Mark Davis and Paul Krawiec in Haiti. 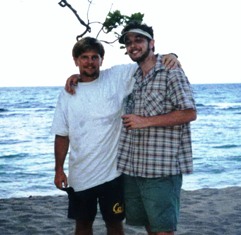 In 1997 Mark Davis and Paul Krawiec flew to Haiti with a grant
of just under $3,000 received from U.C. Berkeley. Haitians in Cap Haitien were randomly approached
in seeking low-cost lodging. Most Haitians were extremely hospitable. The above photo on the beach is near one
purported hideout of Macandal near Cap Haitien (before known as Cap Francais or "Town of Francais"). 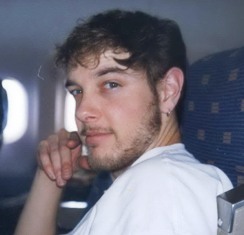 (Above left to right) Staying in a private home in Cap Haitien. Mosquitos in Haiti were a constant presence.  Mark Davis (center) peers out from a vantage point overlooking Port au Prince from a Catholic retreat for priests. Paul Krawiec (right) on the American Airlines flight bound for Haiti. Both of us were completely unprepared for  what lay ahead. Insufficient funds and only one pre-arranged contact made the journey extra challenging. 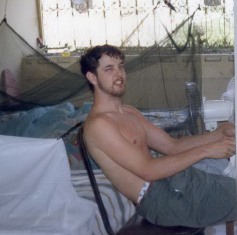 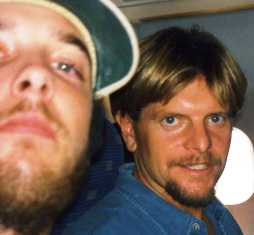 Paul Krawiec (left in Port-au-Prince) holding newborn kittens and (center) at a private home in Le Cap (Haitien). Paul and Mark (right) on the flight from Miami to Port-au-Prince. We were full of optimism and excitement but took no pictures late in the trip and on our return as we both looked like death warmed over, having frayed nerves and in no mood to pose. 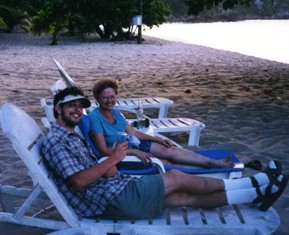 A Baptist missionary, Pat Florum, living in north Haiti, offered us her home.


Not revealed in the documentary or these pictures is the moments of terror felt when surrounded by angry crowds. We were told we were the first whites in recent memory to venture to the remote region of Lenor, the location of the remains of the plantation Lenormand de Mezy where Macandal was taken to serve as a slave. Though we traveled with bodyguards we were constantly approached and warned. We survived with the help of some very brave and supportive Haitians who wanted Macandal's story to be told. We visited many voodoo priests and attended ceremonies privy only to Haitians. There was a stark difference in city areas where individuals were educated and somewhat middle class versus the countryside and small villages where justice is handled locally. We often hid out for days after incidents neither of us were prepared for. Many courageous people risked their lives to protect us. We will forever be grateful to them and thank them.

I would also like to acknowledge Paul Krawiec for joining me on this journey. I could not have done it without you Paul, thank you.